We’ve been looking for a new smart thermostat for some time and decided to go with the Hive themrostat. We had the thermostat installed by Home advisor and it took around 30 minutes to install.Pairing to the app was very easy and gives us the ability to control our system from anywhere and link it to Alexa. This product is very easy to use and program.One thing that we love is the two buttons on top. You can set a mode they call ‘quick’ and let’s us set the heating temporarily for hour or two. We have started using this feature before bed every night.Overall we are very happy with our purchase and will be buying more Hive devices to add to the app!

p
pete c
Easy to use and expandable

I installed the hive thermostat to a furnace that didn't have a c wire at the thermostat but the furnace had the c wire. First thing first was to run new wiring to the thermostat which was fairly easy. Installation of the hive thermostat was fairly simple. You go to the website and enter your wires and it will show you what wires to hook up where. Mounting the thermostat was some and the setup process was quick and easy. About the only thing it didn't do was import the settings from my not so smart thermostat to the hive! The app is well designed and easy to use. Programming was fairly simple but it could have made Monday-Friday and Saturday-Sunday easier or at least made copying days more obvious. Works effortlessly and in the event I know I'll be home early I can heat or cool the house accordingly.Many accessories you can get like water detection to monitor for leaks. In fact it can become a full blown security system with enough money.Not sure if I'll ever save enough with it too pay out of but the accessories may make it very worth while

J
Jim Mitchell
Works as advertised...overall it's better than I expected.

After looking at the NEST (and a few other 'smart' thermostats), I decided to go with this less expensive option when emailed me a special one-day deal. Installation was a breeze and I've never installed a thermostat before even though I'm pretty handy and can figure most things out. Word of advice: take a few photos of the wiring set-up of your OLD t-stat BEFORE you start pulling apart the wires. This helped tremendously as there are several wires that I was unaware of. Luckily most of them matched up perfectly with the HIVE unit (even though some of them are labeled slightly different on the HIVE diagrams, ie: some might have an extra letter or there might be more than one spot for only one wire, don't worry. The main wires (especially the 'C' wire) will match up and that's the important one.)After installing the hub (router) for the wireless setup (as instructed), it took a while to do a software update after connecting to my network. I let it do it's thing (also as instructed) then I went to install the t-stat. As I mentioned, installation was actually pretty easy. The old unit came off the wall quickly and simply. I pulled the wires through the hole on the new HIVE unit and used the enclosed screws to install it. There's also a handy 'level' built-in to the unit so you can level the stat (under the cover; it sits at the top of the frame mount). After mounting it, I installed the wires to where I thought they should go based on the HIVE diagram(s) and instructions. One note: in the HIVE manual, they include some handy small label stickers with letters so you can label your wires BEFORE you remove them from the old stat. DO IT! It will help immensely.I have an android phone (LG g6) and installed the HIVE app and created an account. The only issue I had after installation was getting the unit to connect to the hub/router. Have patience: it took longer than expected but after about 30 minutes of me leaving it alone it finally connected. The wall unit will prompt you upon initial setup to use the manual controls to distinguish what type of furnace you have. If you're not sure, you can change it. (I know my type of unit, but if you're not sure, call your HVAC person that works on your unit and they'll tell you, OR....google the manufacturer/model number and look it up. You should also be able to call a local HVAC company and they can tell you over the phone if your unit is a heat pump, etc. by giving them the manufacturer and model number.I was able to use the phone app almost immediately to control the stat (which was the entire reason for me buying this unit). It's been connected for several weeks now and is working perfectly. I'm happy with all facets of the system, from the style and appearance of the stat itself to the performance of the unit.I don't have an Alexa or Google Home (yet) so I can't attest to the compatibility to those units, but I would recommend the HIVE to my family and friends as a less expensive alternative to the NEST system but one that seems to work equally as well (after also seeing the NEST in use at several friends' homes.) 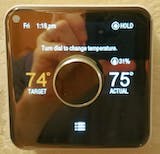 I've been using a Nest thermostat for the past couple of years but wanted something a bit more responsive that would "play nice" with other items so thought I'd give this a try since I own both Alexa and Google. Installation is very similar to the Nest - a bit of a pain but certainly well within the ability of most homeowners to handle on their own and save the cost associated with having a HVAC person out to do it for you....a cost that runs roughly about what this sells for so no small consideration. Next is the appearance - I prefer the clean simplicity of the Nest product but prefer the extra options of this. Nest can be irritating to scroll through so many different settings just to make a simple change. What really sets this apart is the responsiveness and ability to use with either Alexa or Google. Overall I would buy this again.

J
JASON
It’s WORTH IT

UPDATE: It STILL WORKS WELL. Although, I had to change a wire for the heating settings because Customer service gave me wrong info. I'm kind of handy so I knew what was wrong. I can tell Alexa to turn it off or on and even use the app to control before I get home. LOVE IT Fiiiiiivvvveee Staaaaarrrrsssss!Listen, if you are second guessing this product ~>>> DONT! It works well! Even customer service was helpful. I had no problems installing.

19 minutes ago from Portland, OR.
Madison purchased a

4 minutes ago from Boise, ID.
Emma purchased a

19 minutes ago from Phoenix, AZ.
Jackson purchased a

14 minutes ago from Austin, TX.
Aiden purchased a

2 minutes ago from Los Angeles, CA.
Ava purchased a

15 minutes ago from Cheyenne, WY.
Liam purchased a

17 minutes ago from Atlanta, GA.
Mia purchased a

2 minutes ago from Portland, ME.
Lucas purchased a

18 minutes ago from Denver, CO.
Isabella purchased a

5 minutes ago from Hartford, CT.
Noah purchased a

8 minutes ago from Topeka, KS.
Zoe purchased a

2 minutes ago from Boston, MA.
Mason purchased a

2 minutes ago from St. Paul, MN.
Lily purchased a

8 minutes ago from San Diego, CA.
Ethan purchased a

8 minutes ago from Harrisburg, PA.
Caden purchased a

15 minutes ago from Albany, NY.
Logan purchased a

8 minutes ago from Santa Maria, CA.
Emily purchased a

7 minutes ago from Portland, OR.
Bryan purchased a

7 minutes ago from Boise, ID.
Nicholas purchased a

18 minutes ago from Phoenix, AZ.